This ancient confraternity, founded in 1539 by the Dominicans, has the mission of deepening its members' love and reverence to the Holy Eucharist, fostering spiritual growth through Mass and Eucharistic Adoration, especially on Fridays at the parish, and supporting the maintenance and upkeep of the sanctuary through voluntary service and financial support. The members meet monthly at Mass and have a meeting afterwards, and gather each week to help clean the church. They also participate in a Lenten retreat. Membership is open to all men and women in the parish.

All men and women of the Parish may sign up as members. 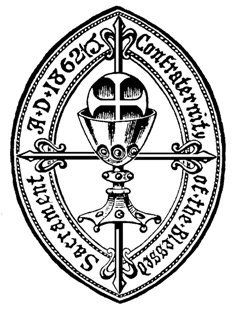 "All glory, praise and adoration be unto You, Lord Jesus Christ, present in the Most Blessed Sacrament of the Altar,

on the throne of Heaven, and in the hearts of your faithful people.

I love You. May Your boundless mercy be upon us and the whole world. Amen."

A Brief History of the Confraternity

The Confraternity of the Blessed Sacrament was founded in 1539 at the Church of Santa Maria Sopra Minerva in Rome. The founder was a Dominican priest, Father Thomas Stella, who was distressed by the lack of respect shown to the Eucharistic presence of our Lord in the Eternal City. He wanted to promote greater devotion to the Blessed Sacrament by means of the Confraternity. In time, it became one of the two confraternities mandated by Church law to be established in every parish in the world, along with the Confraternity of Christian Doctrine.

Shortly after the founding of St. Dominic Church in Eagle Rock, California in 1921, the first pastor, Fr. Pius Driscoll formed The Blessed Sacrament Confraternity, with Mrs. Miriam Kleine as its president, the first of many women to hold that office. Since then, the Confraternity has remained faithful to its original purpose and rendered invaluable service to the parish.