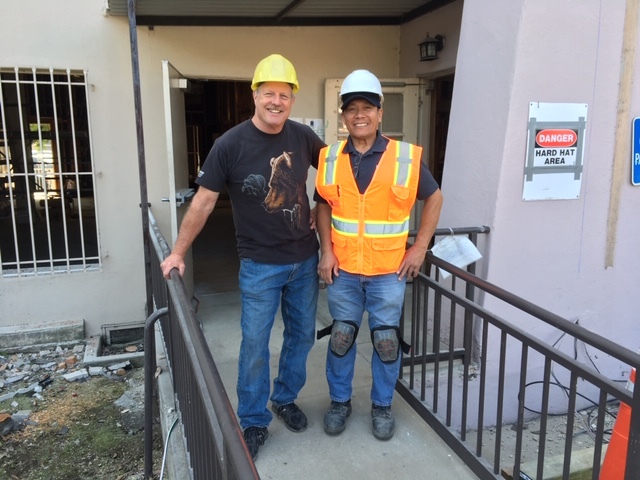 The progress for our community center renovation project has been steady in 2020. This month the air conditioning units were installed, the elevator shaft has been framed, and the exterior wall is being replaced to remove termite damage. Stay tuned for more updates as we move towards completion of the building later this year.

St. Dominic's is a parish in the Eagle Rock district of Los Angeles.  The Dominican friars have served as clergy here since the parish was established in 1921.

Our mission is to help people have a life-changing encounter with Jesus Christ, form them as His disciples and equip them to be apostles. 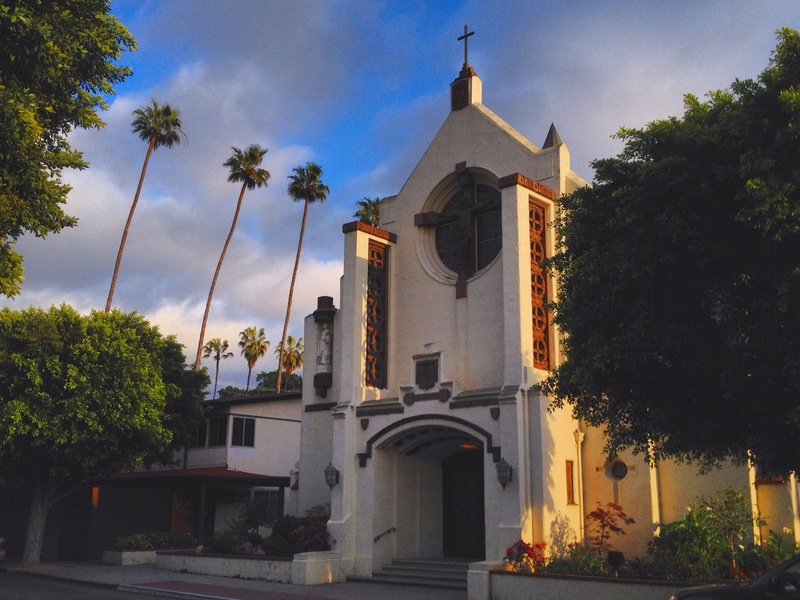 A Brief History of Saint Dominic Church in Eagle Rock

On February 19, 1921, Fr. Lawrence A. McMahon, provincial of the Western Dominican Province (Province of the Most Holy Name of Jesus), met with the Bishop of Monterey and Los Angeles, the Most Reverend John J. Cantrell.  Negotiations began that allowed the Dominican Fathers and Brothers to assume responsibility for the new parish in the rapidly growing suburb of Los Angeles known as Eagle Rock.  In 1920, the U.S. census reported a population of 2250 in the town, but by 1921, when the Dominicans arrived, this number had leaped to 3800.  Fr. Francis Driscoll, OP, who had been pastor of the Dominican Church in Seattle, was appointed the first pastor.  One of his first acts was to take a census of the parish and found that it held 214 Catholic individuals in 66 family units.

Initially, Mass was celebrated in a local family's home, but soon two lots were purchased on Merton Avenue in late 1921, where a tent was erected and the first Mass there was celebrated on October 16, 1921.  By the end of the month a temporary wooden chapel was under construction and more lots acquired and plans made for a permanent rectory on the corner of Merton and Maywood.

The Catholic community built a dual-purpose building in 1925 that served both as a church and an elementary school and the Dominican sisters of the San Rafael community were invited to staff the school.  Five sisters arrived and the school opened with 110 students.  Its first graduates represented the ethnic makeup of the area at the time: German, Irish, Italian and English.

By 1931 the parish had many active groups including the Calaroga Club for youth, the Holy Name Society, Blessed Sacrament Sodality, the Altar Society, St. Vincent de Paul Society, and the Third Order Laity.  The latter group, now known as the Dominican Laity, began in April 1926 with 17 members.

Construction on a new, larger church was begun in 1940 and opened for worship on Rosary Sunday, 1941.  The following year two new school rooms were opened, thus relieving the pressing problem for space at the school.  Immediately after the end of World War II, a new rectory was built for the friars and a convent built for the sisters who taught at the school.  That ended the need for construction for a time, so the parish community focused more fully on the various religious activities and ministries that were flourishing, including a new ministry at Occidental College in 1946.

Fr. George Matanic, OP, was the pastor during the years after Vatican Council II and had the challenging task of implementing the many liturgical changes promulgated by the council.  Under Fr. Vincent Serpa, OP, the sanctuary area in the church was renovated and an excellent sound system installed.  In 1995,  a master plan was laid out for further expansion of parish facilities as the parish grew, which included the purchase of the last private house on Chickasaw block and the Masonic Lodge built on the  corner of Chickasaw and Casper Avenue in 1924.   In response to the birth of the internet and the ubiquity of computers, a computer center/library and a science room were added to the school.  Sadly, as we entered the third millennium, the Dominican sisters of San Rafael decided to leave the parish school, after having provided wonderful teachers and principals for over 70 years.

Over the years the complexion of the parish membership has changed as new waves of immigrants landed in Los Angeles.  St. Dominic's has a rich cultural heritage and is indeed very 'catholic' in its membership.  We look forward to the next steps in the journey with the Lord Jesus, who has always been the shepherd leading this flock. 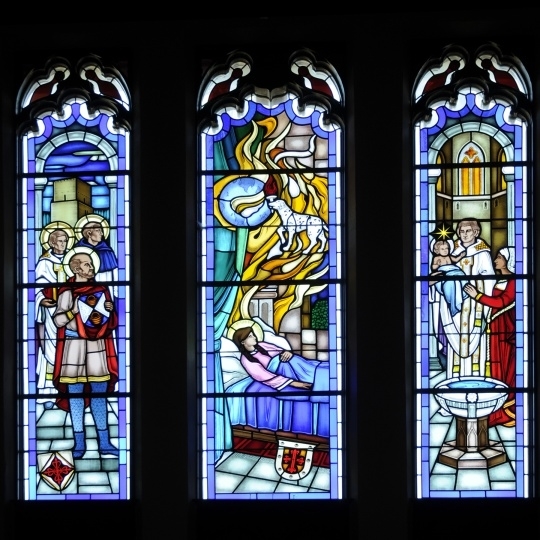 The Life of St. Dominic in Stained Glass

Center panel: Blessed Jane of Aza, the mother of St. Dominic, pictured having a dream of a dog with a torch in its mouth, lighting up the world. 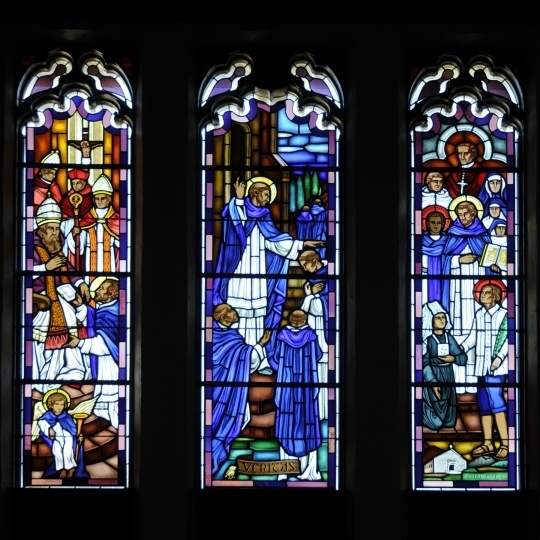 Center panel: St. Dominic sends out the first friars, two by two.  The motto of the Order, Veritas (Truth), is found at the bottom of the panel. 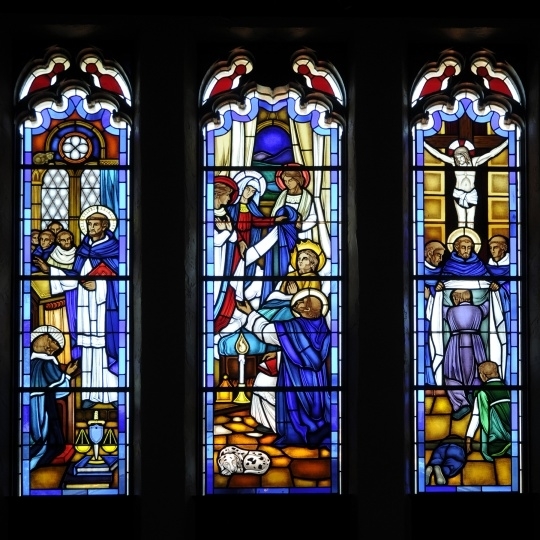 Left panel: Blessed Reginald of Orleans (already a priest, civil and canon lawyer and a professor) meets St. Dominic.  In the bottom corner, right side, is pictured a scale resting upon two law books; the scale represents justice.

Center panel: St. Dominic kneeling at the sick bed of Blessed Reginald, who has a vision of the Blessed Virgin Mary giving him the scapular - now part of the habit of the Dominicans.  Sleeping in the left hand corner is a dog, the mascot of St. Dominic, Domini canis, or "the Lord's dog".

Right panel: St. Dominic giving the habit to Saint Hyacinth and Blessed Celsius, both of Poland, who introduced the Order to their homeland. 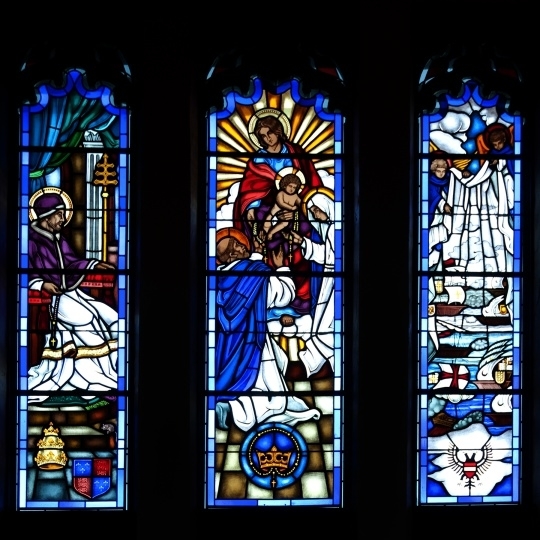 Left panel: Pope St. Pius V, sitting on his throne praying the rosary, gazing at a vision of the battle of Lepanto.

Center panel: The Blessed Virgin Mary and the child, Jesus, giving the rosary to St. Dominic and St. Catherine of Siena.

Right panel: Angels holding the cloth (screen) upon which the battle of Lepanto is depicted. 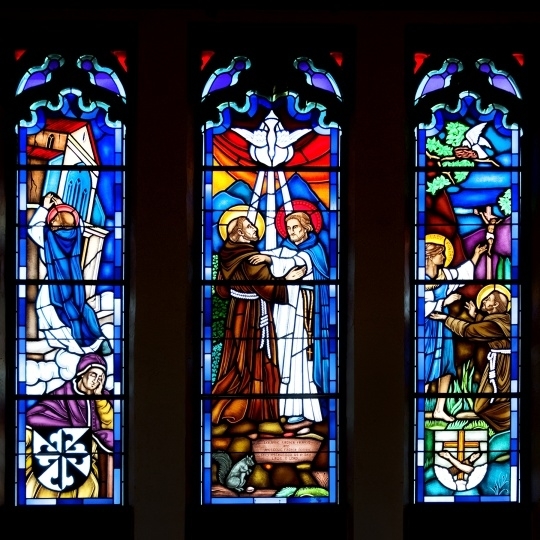 Left panel: Pope Innocent III dreaming of a friar (St. Dominic) supporting the falling Basilica of St. John Lateran, the pope's cathedral in Rome.
At the bottom of the window is the Dominican coat of arms.

Central panel: St. Francis of Assisi and St. Dominic meet.  The squirrel at the bottom represents  St. Francis' love of animals and nature.

Right panel: St. Francis embracing Lady Poverty. The Franciscan coat of arms is at the bottom. 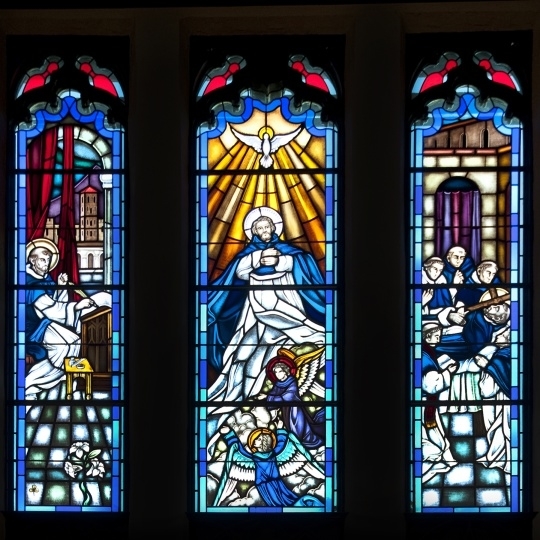 Left panel: St. Dominic writing his last will and testament.  Pictured in the background is one of the towers in Bologna.  In the lower right hand corner is a lily, symbol of the virginity of St. Dominic.

Center panel: The Glorification of St. Dominic.  This picture is based on the painting on the dome over the tomb of St. Dominic in the church of San Domenico, Bologna, Italy.

Right panel: The death of St. Dominic.  The saint assured his distraught brothers, “Do not weep, I shall be of more use to you after death than I ever did in life.”   St. Dominic was known to spend long nights in prayer.  He was even more confident of the effectiveness of his prayers after death!

The life of St. Dominic in stained glass is now complete - from his baptism to his death to his glorification.

"The fundamental task of the evangelization of culture is the challenge to make God visible in the human face of Jesus."